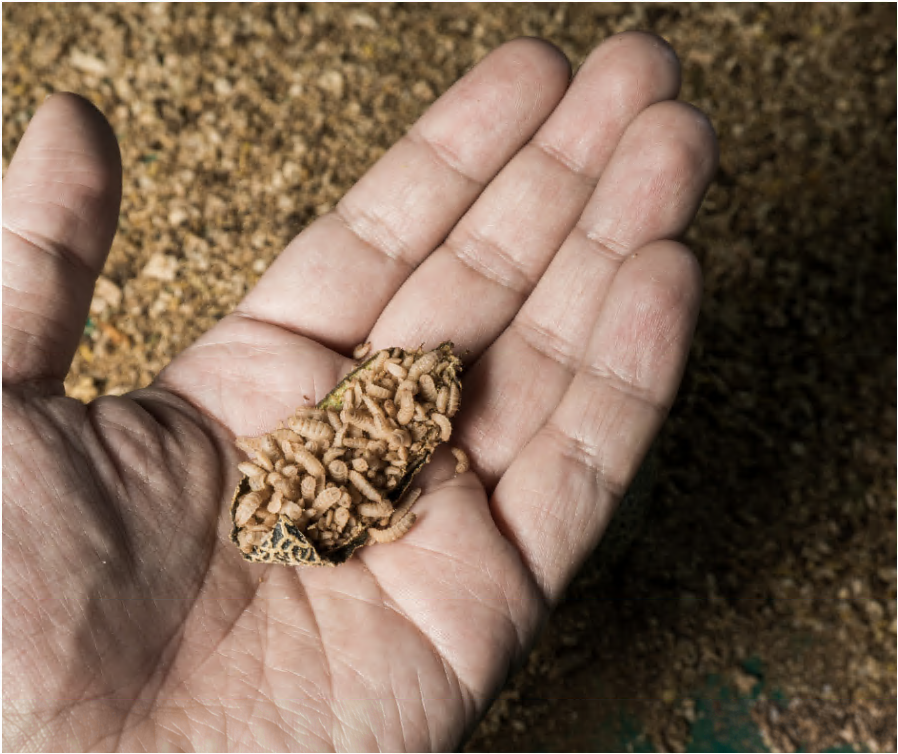 17 May Adding value with bugs

While the idea of eating insects may repulse some people, eating animal products from livestock reared on insects may be less off-putting. Black soldier fly larvae are an insect often produced as feed for livestock, and a recent research article has examined their potential in converting food waste to feed at scale.

Food waste represents lost inputs and value as well as having negative impacts of its own. While reducing food waste is an ongoing challenge, the production of some waste is inevitable. While we commonly think of food waste at the consumer or retail level, losses also occur higher up the supply chain with the producer. For many crops, such as soy and maize, only a few percent of the total production mass entering the human food supply chain are wasted, but this still amounts to millions of tonnes of plant matter globally each year. Conversion of this waste to animal feed is one way to include food waste in a circular economy, and to approach a zero waste system.

Some of the advantages of farming insects on food waste include the ability to co-locate production centres of any size locally to either food waste production or to the farms that will use the feed, due to the flexible growing conditions of these insects. Insect production near crop production has the added advantage that compost – the by-product of insect farming – can be returned to the field as fertiliser.

The yield of larvae for feed from food waste is up to 12%, over a period of as little as two weeks. The larvae are also a high-quality feed, with protein contents of 32-58%. In the case of many commercial aquaculture fish species, they can be a complete feed replacement.

The authors conducted an exploratory life cycle analysis of a hypothetical UK scenario where a large portion of food waste was diverted to insect production. They found that this resulted in a reduced environmental impact compared to biogas production from food waste for indicators such as global warming and land use, but greater impacts for indicators such as water consumption. The environmental impact of larvae production could be further slashed if electricity consumption were reduced or sourced renewably.

Commercial operations are already exploiting the larvae opportunity. In the UK, deals have been struck between supermarkets and insect farms to produce chicken feed from retail food waste. Elsewhere, “the world’s largest insect farm” has been proposed in the US, co-located with a large pet food factory.

Valorising unavoidable food waste and keeping the benefits within the food system has strong potential. Building such possibilities into food system models such as the DELTA Model® will allow their global potential to be better understood.