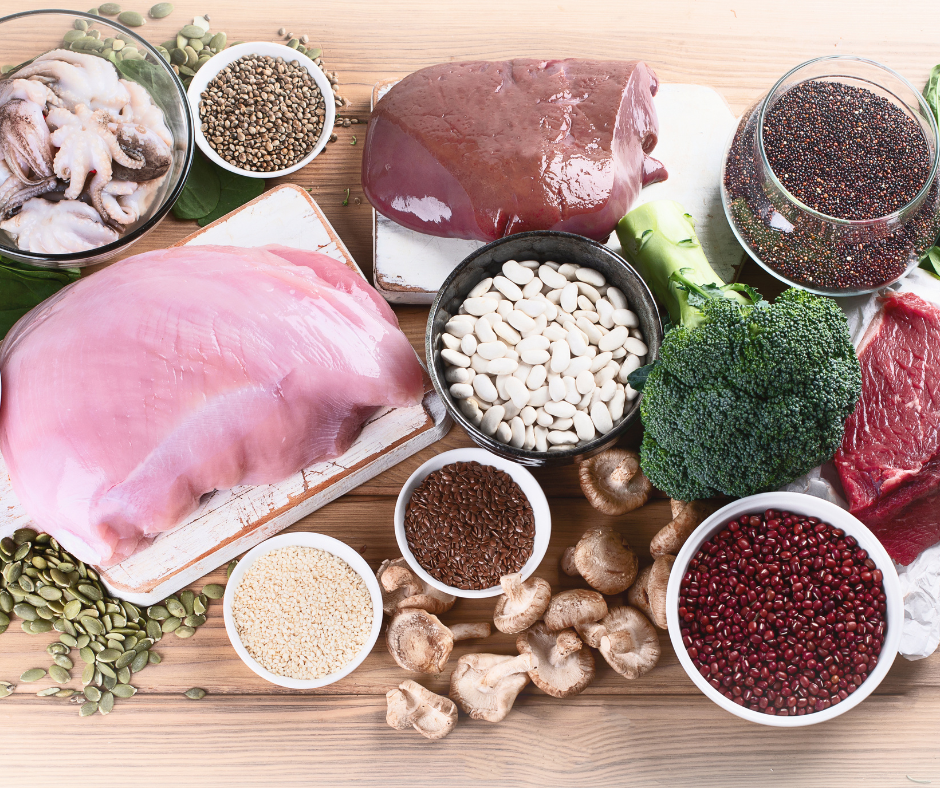 This Thought for Food is part of a series on key nutrients identified as global challenges by the SNi DELTA Model®.

In contrast to vitamin E (the subject of a recent Thought for Food), most people reading this article will understand why they need to get enough iron in their diet. Memories of school biology classes on haemoglobin, and popular media discussion of countering tiredness will spring to mind. But how diverse is the body’s use of iron? How much of a challenge is iron deficiency for the global population? And what are the consequences of deficiency?

Use of iron in the body

The most well-known use of iron by the body is for binding to oxygen in its haemoglobin role, allowing oxygen to be transported from the lungs to respiring tissue around the body. Indeed, around two thirds of the body’s total iron content of 4.5 g is in this form.

Additionally, iron serves a purpose within cells as part of electron transfer reactions – one of the ways in which mitochondria generate energy for cellular function. Iron also forms part of various enzyme systems in diverse contexts.

Iron loss from the body is very low: only around 1 mg per day. Daily turnover within the body is at least ten times this, with old red blood cells broken down and the iron recycled for new cells. The body maintains a small store of iron, and strictly regulates release and absorption to maintain correct concentrations in circulation.

In addition to its essential functions, excess iron can be toxic, and toxicity has been associated with multiple health issues. However, acute iron toxicity is rare and usually a result of other disorders or treatments.

Recommended dietary intakes for iron are particularly high compared to body size in the first year of life due to rapid brain and body growth. Thereafter, they remain elevated compared to adult recommendations until maturity. Requirements are also higher for women than for men, particularly in their teenage years.

Dietary iron comes in two forms: haem and non-haem. The former is found in meat and seafood, and the latter predominantly in plant-foods. The body’s absorption of either form depends on a variety of factors: iron deficient individuals have better absorption that those with healthy iron levels; the content of calcium ingested in the same meal (which competes for absorption with iron); and the balance of haem versus non-haem iron.

Non-haem iron is less bioavailable than haem iron, partly due to the need for reduction to ferrous iron prior to absorption, and partly due to the presence of plant molecules such as phytates, oxalates, and phenolic compounds, which can bind to iron and make it harder to absorb. Non-haem iron absorption can be increased by combination with sources of haem iron, or by combination with foods rich in vitamin C. As such, recommended iron intakes are higher for those consuming diets with a high non-haem:haem iron ratio, to account for the lower bioavailability.

Iron supplements of various forms have been studied to understand their bioavailability. For oral supplements, absorption varies between formulations and studies, from 5-28%, and less is known about the efficacy of its use by the body. However, supplemental iron is best absorbed away from meal time, to avoid absorption inhibition from dietary factors.

Using the DELTA Model® Nutrient Supply and Density tools, the richest sources of iron are all non-haem sources: seeds, spices, and pulses, with offal also appearing. In contrast, the largest contributors to global iron supply are cereals and vegetables, together accounting for around 6 mg per person per day on average, due to the high consumption of these foods. Meat is the next largest contributor, at around 1 mg per day.

However, this global average does not reflect the variation in iron sources in different countries. For example, the DELTA Model® country level data shows that meat (and thus haem iron) contributes around 40% of Argentinian iron consumption, compared to less than 5% in India.

Iron deficiency impacts billions of people. It’s estimated that over 1.2 billion people suffer from iron deficiency anaemia, and this burden is disproportionately carried by women and children: global estimates range from 25-42% of all children are deficient, and 37-40% of women.

Lower-income countries generally have higher-than-average rates of deficiency, but rates are also concerning in specific sub-populations more widely. For example, in the last large-scale nutrition survey, over a third of the female New Zealand population aged 15-18 had inadequate iron intake, 12% had low iron stores, and both indicators were trending upwards from previous assessments.

Using the DELTA Model® with 2018 data, the global iron supply almost exactly matched global iron requirement. Thus, given the inequitable distribution of food and nutrition, deficiency will be inevitable.

At a country level, we found that 59 out of 170 countries had sufficient iron availability to meet the requirements of their populations. The highest iron surpluses were seen in several African and Pacific nations, which was surprising. However, it should be noted that this supply was almost exclusively plant-sourced, and the requirement value was not adjusted for bioavailability. The countries with the greatest iron gaps were generally low-income countries, and predominantly African.

Iron deficiency (the absence of iron stores) can be identified relatively easily from blood samples, and is most commonly a result of deficient intakes. Iron deficiency anaemia is the combination of anaemia (insufficient or dysfunctional red blood cells) with iron deficiency, and the two are deeply interconnected.

The most common health outcomes of deficiency in adults are well known: low energy and endurance, reduced immune function, and impacts on behaviour, mood, and brain function.

There are more concerning implications of iron deficiency during pregnancy for both the mother and child, and their iron status is closely linked. When insufficient iron is available to the infant, iron is preferentially used by the red blood cells, with negative consequences for other tissue and development, often detectable later in life.

In contrast to the uncertainties around individual requirements for global problem nutrients like calcium and vitamin E, iron has received more study and achieved greater consensus on bodily requirement and bioavailability. There is still much to learn about these qualities, but the greater certainty and acute impacts of deficiency have led to international focus on improving iron status around the world.

Many international programs exist targeting iron status in at-risk populations, through education, fortification, and supplementation. But there is still a need for consideration of iron content and bioavailability in all diets. Iron awareness week in New Zealand offers a reminder for our own diets, those of our communities, and internationally.

The SNi® team thank Professor Pamela von Hurst for contributing her expertise to this article.